As part of National Eye Health Week 2019 , Optometry Scotland has held a ‘blind’ baking contest to raise awareness of the challenges facing those living with sight loss.

Optometry Scotland invited teams from a variety of sight-related charities to take part in a cake decorating competition in Glasgow in a bid to highlight the importance of eye health.

Representatives from Scottish War Blinded, NES (NHS Education for Scotland}, ABDO Association of British Dispensing Opticians), Visibility and Optometry Scotland competed in teams of two, one of whom was blindfolded and taking direction from their teammate, in hopes of winning the accolade of best decorated cake.

Nicola McElvanney communications Chair of Optometry Scotland said: “It is extremely important to get people talking about the impact of sight loss and we felt this was a creative way to generate conversation and make people think about this issue during National Eye Health Week.

“I think the competitors found the challenge a lot harder than they expected which really highlights how difficult living with sight loss can be.

“Sight loss can be prevented or reduced by attending your optometrist for an eye examination that is NHS funded by the Scottish Government.

“I would urge everyone to have an eye examination even if they do not think they have a problem with their vision.”

The winners of best decorated cake were Debbie McGill from ABDO and Dr Alice McTrusty from NES. 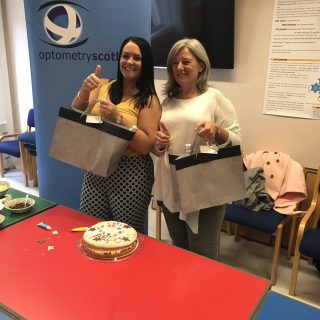 Thank you to everyone who came along to take part!