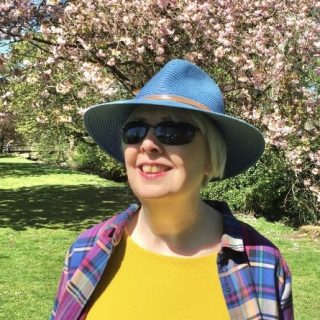 Angela Carson (nee Beirne) was born in South Glasgow in 1953, one of four siblings. The family moved to Kirkintilloch in North Glasgow soon after where Angela attended school.
Glasgow meant a lot to Angela, and she chose to live and work in the city for most of her life.

Angela’s father was an art teacher, a talent that Angela inherited, clearly obvious to those of us who were able to observe her detailed and perfect drawings recorded within patient notes.

Angela left school in 1970 and attended Glasgow College of Technology to study Ophthalmic Optics, she graduated in 1974, completed pre-registration year in the Glasgow Eye Infirmary (GEI) and qualified as an ophthalmic optician in 1975.
In her early career she worked with a number of notable ophthalmic surgeons and pioneering optometrists such as George Miller and Elizabeth MacLure.
She worked full time at the Glasgow Eye Infirmary from 1974 until 1980 in a number of developing roles for Optometry such as specialist contact lens fitting, low vision assessment and providing  support for general and specialist ophthalmology clinics such as co-management of glaucoma.
In 1981 she opted for a part-time role within the GEI and split her time between hospital work and community practice with a post in ‘Trotter’s Opticians’ of Edinburgh. During her time at Trotters she commuted   by train between Edinburgh and Glasgow and on 30 July 1984 she survived the Polmont Train crash which killed  13 and injured 17 passengers. She sometimes talked about meeting the other members of the “Survivors Club” during her daily journey.

Angela did leave Glasgow for a period when she took up a Senior Lecturer post Optometry Department of Diagnostic Sciences Hong Kong Polytechnic in 1986.
Her specialist subjects included contact lens practice, professional studies and practice management.
She gained fresh appreciation and respect from her students and colleagues in Hong Kong who were extremely disappointed when she returned to Scotland in late 1988.

On her return to Scotland she returned to community practice with ‘Harry McMenamin’ in Hamilton, followed by a spell in ‘Peter Millicans Associates’ contact lens practice before resuming her role in the hospital eye service, taking up a new post in Stobhill Hospital in 1990.
Angela was promoted to the ‘Head of Optometry’ in 1993 and led a quiet revolution promoting and developing the role of hospital optometry across all Glasgow hospital sites.
She was dedicated to teaching and training colleagues , pre reg students, medical trainees and overseas ophthalmologists.
She promoted the role of third sector organisations into the care framework within eye clinics, most notably organisations such as ‘Visibility’ having an integral role in the management of patients with permanent visual loss as part of a multi-disciplinary approach for low vision care in Gartnavel General Hospital.
She was College examiner from 1981 until her retirement in 2015 assessing PQE and DCLP candidates.

As indicated above she had a specialist interest in contact lens practice and developed expert skills in the management of irregular corneae and keratoconus.
She acquired the Diploma in Contact lens practice 1977 and qualified as an independent prescribing optometrist in 2012.

The Commonwealth Games came to Glasgow in 2014, typically Angela volunteered to work in the on-site eye clinic providing eyecare services to hundreds of athletes and support staff during the period of the Games.
Angela served as the lead clinician for this project and won great acclaim from the organisers for her ability to co-ordinate the staff team, organise the equipment & layout and facilitate the smooth running of the clinic.

Angela met Graham Carson at a party on New Year’s Day 1975. Graham became her greatest friend and soulmate, they married in 1992 and enjoyed many happy years together in Strathaven.
They enjoyed travelling and had numerous enjoyable holidays together. There could have been more trips as Graham travelled to conferences worldwide  but when Angela was asked if she would like to accompany him staying at the Fours Seasons in Las Vegas or the Ritz Carlton in Hong Kong her usual answer was “ I have patients to see  and my staff need their holidays at that time”.

But her best holidays were always skiing in the Italian Dolomites. Graham had learned to ski during the two years Angela was in Hong Kong  so  on her return she also  learned and  then found that she simply adored “Cruising the Blues” together.

Both were enthusiastic football fans, she a big Celtic fan and he a Rangers supporter, frequently resulting in some lively post-match point scoring, banter and debate!
They were however proper football fans, and they both did support each other’s teams in European competitions.  When  the Glasgow teams reached their respective UEFA Cup finals; Celtic in Seville and Rangers in Manchester, Graham had  already secured much sought after tickets.  Angela went to Spain with her brother and  a few years later  accompanied Graham to the  game in Manchester  – neither team lifted the cup but Angela and Graham, the eternal pragmatists, made the most of the moment.

Angela was dedicated to her patients adopting a warm-hearted, sincere and genuine interest in their lives and activities.
Stories abound about Angela compassion for her patients such as the time she opted to drive a patient home from the clinic because the transport was late and on another occasions when she discovered, that  due to ill health, one of her long-standing patients had to find a new home for cat  ‘Sniffy’, she immediately adopted the cat and this led to a life-long passion for the feline species, something that gave her great pleasure, especially when she retired – her most recent fur-baby  being aptly named ‘Oakley’!

Angela retired in 2015, but she and Graham did not get enough years together in retirement before she developed cancer 3 years ago.

She fought the disease in a typically dignified and brave manner, enduring several rounds of debilitating treatment.
Graham describes her as being stoic, courageous and never once complaining.

Angela died peacefully on the 22nd of April 2021, at home with Graham by her side.

She was loved and cherished by her Graham, her family & friends.
Graham had the good fortune to spend so many great times with her, special memories that he can fondly retrieve and treasure.

Her many colleagues will recall a consummate professional, dedicated and committed to her role as an innovator and pathfinder for optometric development.
Someone who unselfishly shared her encyclopaedic knowledge of eyecare, an expert who was happiest teaching & training colleagues and managing her patients.

Angela seemed driven by the need for professional development and optimum clinical performance & achievement – her enthusiasm for any task was simply admirable.
For several decades she was at the peak of her profession and many of us have so much to be grateful for her teaching, leadership and influence that helped ensure we too were able to fulfill our potential.

Many will recall her wicked sense of humour, e.g., watching ‘Scary Anji’ pretending to torment a new trainee only for that individual to find the façade rapidly melting away revealing a kind, sincere, honest and caring colleague.
For many Angela would become one of the most important and influential characters in their professional life. A real people’s person who would provide life-long loyalty and support.

Angela was simply an exceptional person, a thoroughly decent human being; respected and loved by so many who had the pleasure to know or work with her.
She has gone too soon and is greatly missed.

An “ In Memory” page has been set up in support of the Beatson  Hospital Charity  Fundraiser to purchase a new MRI Scanner  and  should anyone  wish to  make a small  donation their contribution would be greatly appreciated.

Details are as follows:-